According to WHO,”there is compelling evidence that male circumcision reduces the risk of heterosexually acquired HIV infection in men by approximately 60% and other infections like HPV which is believed to be the most common cause of Penile cancer”.

Circumcision is a kind of Surgical Procedure which involves removal of foreskin(prepuce) i.e., skin covering the tip of penis.

Though this procedure is performed for various medical causes as mentioned below,it is also performed in many regions as a religious custom.

1.  Phimosis i.e., Tight Foreskin
It is the medical term for when the foreskin is too tight and unable to retract over the head of penis. This can be caused by infection, trauma or failure of the foreskin to loosen during childhood or adolescence.

Paraphimosis occurs when the foreskin is retracted from the head of the penis, becomes trapped and is unable to return to its usual position.

5.  Diseases of the foreskin, including cancer. 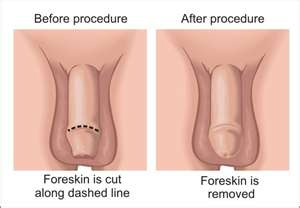 AGE limitation: There is no age criteria for this surgery and can be done in all males from newborns to adults.But only the mode of surgery and complexity differs. There is a wide range of opinions regarding the validity of procedure in newborns.

Now a days with the upcoming facts that circumcision helps in preventing various ailments in the future, there is a rise in the percentage of population opting for the surgery.But one should be aware of the technical and surgical skills involved in the procedure owing to the postprocedural disfigurement of the penis and always look for a properly qualified doctor to perform the procedure.

Recovery Time : Sedentary activity and Travelling is allowed immediately after the procedure. Moderate activity for a week and normal activities from then…

Outcome : Outcomes are usually good when it is called COSMETIC, but no one can promise since it always differ from patient to patient depending upon the wound healing etc.,