One most advanced analysis present in our lab which gives more extensive, accurate, reliable analysis than the regular Semen Analysis done elsewhere with outdated protocols.

It proves more sensible, economical and effective to rule out the male factor in cases of infertility through a non invasive investigation, the semen analysis and stands in the first order of aregular fertility protocol, which is usually obtained from the male after an abstinence of 2 to 5 days from sexual activity. (shorter period of abstinence may affect sperm
concentration while a longer period may diminish sperm motility.)
Analysis includes the determination of standard parameters such as the sperm concentration, motility and progressive motility. General sperm morphology, semen volume, degree of sperm aggulutination, leucocyte (WBC) and liquefication time will also be noted. 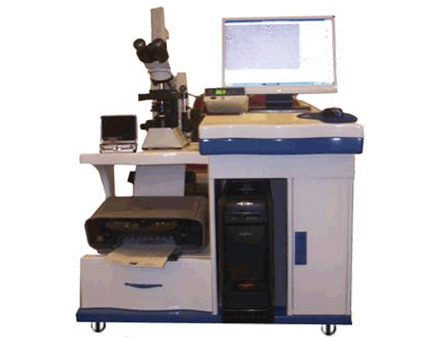 Sperm morphology is important because it too reflects upon the ability of the sperm to fertilize an egg. A normal semen sample may consist of 60 percent normal, correctly shaped sperm and the remaining 40 percent may be abnormally shaped or abnormal sperms.
Sperm viability or the percentage of viable sperm may be tested using the Hypoosomotic solution assay. This test examines the sperm’s plasma membrane and its ability to function, which may indicate its fertility.
Sperm agglutination or the tendency of sperms to clump together which commonly called as viscosity gives an estimate of presence of AntiSpermAntibodies. It is normal to find white blood cells in the semen, but the same if found in excess numbers indicates the presence of infection (eg: prostatitis) which then obviates the need for semen culture that offers both diagnosis and treatment to the problem. If there are no sperms in the given semen sample, then evaluation of fructose concentration is done, the lack of which indicates blockage of Vas deferens (carries sperms from epidydimis to ejaculatory duct in the prostate gland), a condition popularly called as Obstructive Azoospermia. This can be taken care of the newer advanced microsurgeries (VasoEpidydimal Anastomoses).

CASA refers to an automated system to analyse the digitized successive images of sperm, process and provide accurate, precise, and meaningful information on the kinematics of individual cells, and also population summary statistics, that is, mean values.